I got a very exciting text from my sister the other day.

She explained that she’d gone for lunch in Hackney with my dad at one of those old-style burger franchises (Jenny’s, Wimpy, you know the sort) and the menu sent her straight back to our shared childhoods.

“Went to a cafe with dad today, they have those egg & frankfurter burgers, AND brown derbys” 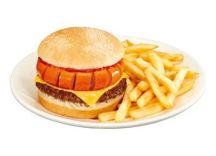 I immediatly had a craving for a frankfurter megaburger – the sort I used to have on every birthday until I was 10 at Starburger on Edgware Road, followed by a Brown Derby (a ring doughnut with ice cream, sauce and nuts on top – I KNOW RIGHT??). Sometimes if I was feeling a bit maverick I’d go for egg and chips, but more often than not it was the megaburger all the way – somehow improved with a squelch of Starburger’s vinergary, thin ketchup.

The mere thought of these dishes and the memories they conjured up made me smile, and it got me thinking about all the other ways in which I’ve been trying to relive aspects of my childhood recently – whether it be through listening to lots of Madness (I used to do the Madness ‘walk’ in the hallway with my sisters & cousins as my mum and aunt looked on, bemused), looking at old photos of our family holidays, or watching Home Alone to remind me of the numerous Christmases we watched it on loop and then booby-trapped my mum’s flat with assorted toys. Oh, the hilarity.

Nostalgia is an odd one. I always assumed it was a symptom of either entering your twilight years or being dissatisfied with your current situation, but I’m 27 and quite content with my lot, so it seems odd to find myself Googling the nearest Wimpy so I can relive fast food from my childhood.

It was better in my DDR, kiddo…

One thing that really caught my attention when I lived in East Berlin for a few months in 2005 was the infamous feeling of ‘Ostalgie’ – the nostalgia and affection for old brands, TV shows, music and cuisine (if you can call it that) in East Berlin that quickly dissipated once the wall fell in 1990.

This seemed a bit ridiculous to me, listening to my neighbours whinge about how much better things were before the wall fell – between the Stasi bugging everyone’s flats, the isolation from the rest of the world and the general limitations on everyday life, it all seemed, well, a bit crap to be honest. However they seemed adamant that despite all the new shiny brands and a currency that was actually accepted beyond the country’s borders, their lives weren’t that much better.

Sometimes people prefer walls and limitations – the world is much scarier when you have to make your own choices, and ergo your own mistakes. On the other hand, it could be that they were just homesick – the changes happened very quickly and everyone rushed in to the new consumerist West without looking back and taking stock of the things they valued in their old lives.

I reckon much of my ardor for the days of yor is down to a touch of homesickness, I haven’t lived in my home town of London for almost 6 years and I’m from quite a large and close family. In lieu of being able to see them as much as I’d like to (*shakes fist at First Great Western*) I instead gravitate towards the things that I associate with the happy memories I’ve shared with them. And with my family it’s not surprising that most of these are related to food.

So don’t be surprised if you spot me in the street one day trying to flag down strangers, asking where I can find the nearest London-style chippy (MUST sell saveloy), a roast to match my dad’s, or a picnic area where I can enjoy my buttery cheese sandwiches in the rain. I’m just missing my family.

Or maybe the frankfurter Megaburger really was just that good. 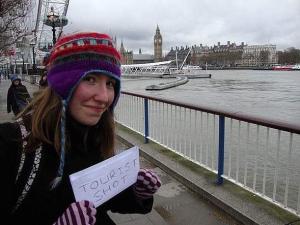 2 thoughts on “Lost in Nostalgia”

Join 1,209 other subscribers
Follow A Life Less Organised on WordPress.com