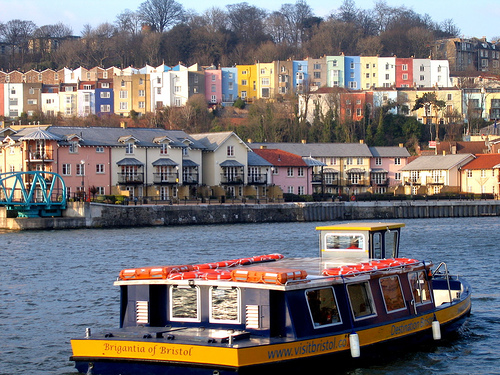 Bristol is a great city for so many reasons, but one of the big ones for me is that it’s such a lovely place to go for a scenic amble of a weekend afternoon. There are lots of routes I like to take through the city, but my favourite by far is around the harbour.

The richest part of Bristol’s history starts here – some of the oldest and most beautiful buildings in the city can be found by the water and there is always something exciting going on no matter what the hour or time of year. So the next time you’re stuck for something to do of a weekend, I suggest you gather some friends and go on a cider or ale quest around the water’s edge. I’ve even put together a suggested route, because I’m nice like that.

Stage One: Welsh Back

You can’t start any central pub crawl of Bristol without taking in the legend that is The Apple. Firstly, this is a pub on a boat. We have several of these in Bristol, but as a native Londoner this never gets old. Secondly, they have over 40 ciders available at any one time. I don’t know about you, but I view that as a challenge to be accepted.

Three Brothers Burgers next door is a good alternative starting point, with a fine selection of beers & ciders, and a super good value £5 lunch deal for a burger & fries (available every day too!).

The King Street Brewhouse is across the road/cobbles from The Apple and is a large pub – perfect for big groups to huddle inside or take a seat at the long benches outside. They show sport (if that’s your thing) and have a fairly extensive beer selection, as well as an in-house brewery (hence the name) which you can have a tour of, complete with samples.

Next stop should by rights be The Old Duke . The Duke is well known for hosting its own jazz festival and quality music almost every night of the week – they also do a rather fine selection of local ales and ciders, so a good place to get any party started!

Across the road, The Llandoger Trow is currently closed and awaiting new management. The outside is still as impressive as ever with it’s mock Tudor exterior. The pub was allegedly the birthplace of literary classic ‘Treasure Island’ and you can certainly imagine a fair few interesting characters having propped up the bar over the ages.

Further down the street is when it starts to get reallly good. The King William boasts the rarity of not one but THREE pool tables, and is surrounded by what has come to be known as Bristol’s ‘Beermuda Triangle’ (more like a rhombus these days) – The Famous Royal Navy Volunteer (fantastic beers, cosy chairs and hidden nooks), The Beer Emporium (all the beer!) and Small Bar (come for the beer, stay for the hot dogs).  Kong’s is also well worth a look in (ping pong! Arcade games! Table football!)

Notable mentions: Under the Stars is a lovely bar on a boat, they do film nights, have a nice top deck for enjoying the sunshine, and also do a great tapas menu. The Stable (cider, pizza & pies!) and No.1 Harbourside (great beer and live music) complete the trio of nicer bars along this section, unless you’re happy enough sat on the cobbles outside The Arnolifini dangling your feet over the edge of the quay, proper Bristol style.

This is where the walk start to get particularly interesting. Once you’ve crossed over the swing bridge on Redcliffe Way, follow the water around past the little boat yard, alongside the old pirate caves and the old Scout Hut and then around to The Ostrich.

The Ostrich is one of the best places to come on a sunny day due to having so much outdoor seating in such a great location – you can watch the boats go by and hot air balloons soar overhead in summer. Plus there’s a pirate skeleton in a cubby hole when you go in – it’s all very exciting.

Next up is The Golden Guinea around the corner – a litte treasure of a pub which has lots of exciting urban art adorning the walls and some fantastic ales and craft beers on tap. It’s also next door to the spooky old general hospital building, for the ghostbusters among you.

Notable mentions: The Ship (another great traditional cubby-hole of a pub), The Portwall Tavern, The Severn Stars (consistently refreshed & interesting ale selection, plus if you sit outside you might be able to hear some of the music emanating from The Fleece next door)

You’ll have a bit of a walk on your hands now – a whole five minutes during which you can work up a good thirst for the next watering hole.

You can either follow Cumberland Road alongside the feeder canal, or go for the more aesthetic route of cutting down by M Shed and walking along the water, taking in the impressive views of the city and the old docks railway.

By the time you reach The Orchard Inn you should certainly be parched enough to have earned one of their ciders. The problem might be deciding which one (A tip: They also serve beer and ale, but don’t ask about wine, you’ll just be told they have “Light and Dark” varieties. Ahem).

Once you’re suitably hydrated, you can continue along the harbour (past the mighty landmarks of the SS Great Britain and The Matthew) until you reach The Cottage. The inside isn’t much to shout about but again the views are very impressive – you can look out to Ashton Vale or up to the Georgian terrcaes of Clifton and the colourful houses of Hotwells, it all makes me very happy to have chosen Bristol as my home.

Next up is The Nova Scotia – you can get here by cutting through the Harbour Master car park and then through the old boat building yard – both a reminder of Bristol’s nautical heritage. The Nova Scotia is a another cosy little pub where you can easily lose several hours – but remember you’re on a quest; no loitering!

Notable mentions: The Louisiana, The Avon Packet (more on the New Cut than the harbour, but you can still see water so it counts).

We’re on the home stretch now folks, so fear not. Although, if you’ve been sticking to local ciders the whole time I expect you wouldn’t have made it past the 3rd pub on this crawl. No matter.

Once you’ve cut over another swing bridge you’ll be over the other side of the harbour – back in to the safe haven of the North Side of the river. Good times.

The first pub to greet you is The Pump House, one of the more expensive bars on route and it also prides itself on some very good food – so if you’re getting peckish this would definitely be the time and place to refuel.

Then it’s on to the Grain Barge – my favourite spot in the summer as it stocks all of the Bristol Beer Factory products, has a lovely upstairs deck to lounge on in the sunshine, puts on brilliant gigs and has a great menu to boot – there’s not much this place does wrong (the toilets are a bit mank, but we are on a boat, so I’ll let them off).

If you’re feeling brave, the best place to finish your epic journey has to be The Mardyke; dark, full of locals mumbling incomprehensible West Country slang and pints of cider for £1.35 – a surreal but always enjoyable experience.

Get one final drink down your neck and then call it a night. Or continue up to the rather wonderful pubs on offer on Jacob’s Wells Road…Taxi!