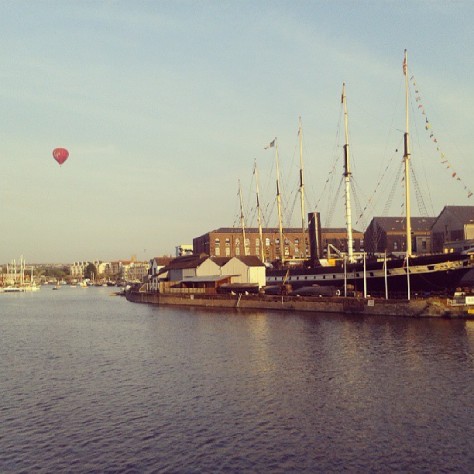 I could list plenty of things that led me to Bristol and have kept me here for the past 5 years, whether it be the thriving and eclectic music scene, the quirky urban art across the city orjust being able to walk around the harbour.

I read a fantastic post about Bristol recently that I thought perfectly summed up the city and why I’ve come to love it so much; you can read Rachel Schraer’s post here.

Recently, I’d say that Bristol has come in to its own even more, with its independent muisc, art and food scenes becoming even more pronounced and successful. The support for local businesses here is astounding, so I thought it was about time to take stock and appreciate just what Bristol has achieved in the past 12 or so months, along with some exciting things still to come.

A flying start for the newbies

I’ve lost count of the amount of new businesses I’ve noticed spring up in the past 18 months; it’s been a great thing to see, especially amongst all the talk of the recession and how hard it has hit some communities. Luckily, alongside all these new businesses starting up, Bristol has also put some brilliant strategies in place to try and limit the damage that can be done in these tough economic times.

Some examples are the introduction of the Bristol Pound, the investment given to East Street in Bedminster by the Portas Project and the low rent initiatives from the council, the latter of which have contributed to turning formerly dreary areas such as the Bear Pit being in to bustling hubs for independent stalls and shops.

We’ve seen an influx of high quality retailers, with Easton in particular getting getting a double dose courtesy of the East Bristol Bakery and No. 12 Deli. Hart’s Bakery has been the first business to take up residence under the arches at Temple Meads, Roll for Soul used crowd funding to launch a cycle workshop & cafe in the centre and Gloucester Road has recently seen the opening of Spanish deli El Comado.

As well as the new faces to Bristol, we’ve also been lucky enough to see the expansion of some well loved brands such as Grillstock, who finally opened their new smokehouse on the Triangle following the popularity of their stall in St Nicholas Market; as well as new branches from El Puerto, The Thali Cafe, Grounded and Zazu’s Kitchen.

Bringing beer to the masses

If 2012 was the year for meat (with Meat and Bread, Atomic Burger, Chomp and Guerilla Burger all arriving in the city – see my meat feast post here), then 2013 has to be the year for ales and craft beer. Bristol already has an impressive array of pubs that stock great selections as well as some award-winning local breweries, but of late some specialist beer bars have been cropping up at the rate that speakeasy style cocktail bars such as Milk Thistle and Hyde & Co did a year or so ago.

Beerd and Colston Yard were among the first champions of craft and rare beers in the city, with Brew Dog following at the start of the year. Late 2013 will see the arrival of The Beer Emporium, The Crofters Rights and the Bavarian Beerhouse. Exciting times indeed!

Dancing (& eating) in the streets

One thing I noticed during my first summer in Bristol was just how many festivals and events the city plays host to every year. From May until October in particular, there is not a weekend that goes by without some sort of festival going on. The city has the flagship events such as the Harbourside Festival, St Paul’s Carnival, Brisfest (formerly Ashton Court Festival) and the Balloon Fiesta but has recently built up some impressive new ones from scratch such as urban art celebrations Upfest and See No Evil; the Bristol Cycle Festival, Bristol Pride and the numerous local arts trails.

Mayor George Ferguson also recently introduced a monthly event called Make Sundays Special, where many roads in the centre are closed to traffic with music stages, dancers, food markets and children’s games filling the streets instead.

In my opinion, as a food-obsessed lady, by far the most exciting development on the Bristol event scene in the past few months has been the emergence of street food and pop ups such as Bristol EATS, Streat Food Collective and 40 Alfred Place. I wrote about my first trip to Bristol EATS a couple of months ago, you can read about me stuffing my face and getting very over excited about it all here.

To summarise, as well as already being a vibrant and unique city to live in, I think Bristol has started to show that it can be taken seriously as an emerging destination for food & drink lovers and as an example of how communities and individuals can not only support but also start up their own projects and businesses.

I’m just concerned that I don’t know where I’m going to find the time to try all of the new places!

14 thoughts on “Why these are Exciting Times for Bristol”