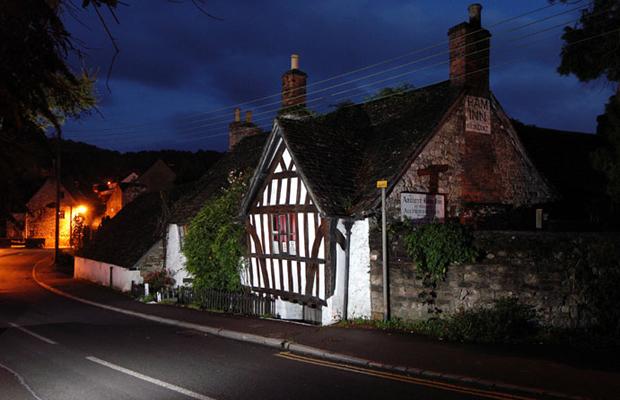 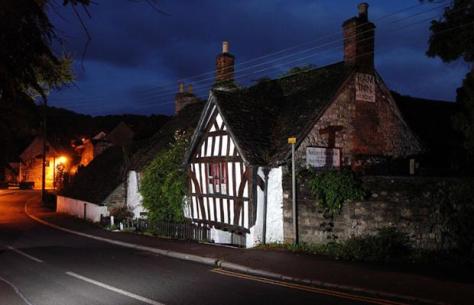 For a good friend’s hen do, 12 of us ventured in to the Cotswolds and decided to do what any hedonistic group of twenty-somethings should on such an occasion – we went on a ghost tour. In an old man’s house. In the middle of the night.

The Ancient Ram Inn in Wooton-Under-Edge is notorious among fans of the supernatural for allegedly being the most haunted place in England. Quite the statement; we have a lot of old, creepy buildings here. We arrived there at 9pm and met our guides from Haunted Evenings, who we would be entrusting with introducing us to all things spooky and paranormal. When we arrived, we were greeted with 4 boxes of wine – one of which was already empty – and 3 half-cut Ghost Hunters.

First up, a tour of the house. Our formidable group stomped around the creaky house, looking in dark and dusty rooms, all full of weird and wonderful trinkets collected by John over the years. Pub signs, teddies, assorted tourist tat – it was all here in its chaotic glory. I found this more interesting than the various tales of spooky goings-on, to be honest. But we were here to find ghosts, and by Jove, we were going to do this properly. I was channelling Louis Theroux that night, down to the wry smile and befuddled expression when the ghost hunters told us we would be performing a séance.

At this point, we were split in to 2 groups. My group stayed in the Witches Room – sometimes used to host newly-married couples. Romantic. The other group were sent to the Bishop’s Room (apparently the most haunted room) for their séance. We sat in circle around a table for a while, but nothing happened. The ghost hunters decided that maybe we should move to the downstairs bar to have a another go at channelling the spirits. It was at this point things started to get weird. Not spooky, ‘Scooby Doo’ weird, but ‘Friday night in Cardiff’ weird.

We heard a comotion outside the house and rushed to the window to see one of the ghost hunters involved in a tussle with another guy. It soon emerged that the stranger had been walking past and called Mr Ghost Hunter a ‘satanist’. Said ghost hunter then responded to this slander in the most spiritual way possible – he punched him in the face.

Once calm had been restored, we all gathered in the bar and started on the wine. And by ‘we’, I don’t just mean the hen party. The ghost hunters were seemingly parched too.

In between glugs of Chardonnay, we resumed our intrepid voyage in to the paranormal. The Ouija board came out. And this is where things got even weirder. But not ‘Unleashing mania on a Jumanji-like scale’ weird, more ‘Your friend Helen is sat on the stairs, crying in to her gin’ weird. Once the glass started to move across the baord after a few minutes, we were introduced to someone called ‘Edward’  who seemingly wanted to talk to us. His first move was to spell out ‘H-1’, which our guides said meant ‘hen’, as in the hen of our party. I pulled my most incredulous face yet. Still, we continued. Edward now decided to spell out a man’s name, which seemed to make our female guide quite emotional.

“Oh my God, that’s a guy I used to have an on-off thing with for years. Why would the ghost be telling us that name? That’s so weird”

She took another sip of her wine and looked concerned. But the looks being exchanged among the hen party were considerably more concerned – we’d already long accepted that the guides were moving the glasses across the boards with increasing tactlessness (that’s what 2 boxes of Asda wine will do to you – aspiring ghost hunters take note), so why was she so surprised to see this name being spelled out? It continued.

“We haven’t even spoken for a while. Maybe it’s a sign that something has happened to him, or that he’s the one for me.”

She started to well up. She took another sip of wine. Another ghost hunter staggered around behind us, encouraging some of us to go in to the attic to talk to more ghouls. Some of the group obliged, and soon the rest of us could hear the ghost hunter shouting at the ghosts from 2 floors down – despite none of the group with him seeing or hearing anything weird at all. The strangest things on our ghost hunt had become the erratic behavior of our guides. Oh dear.

After this, we were done. It was 2am, it was cold, our guides were drunk and we were resolutely sober. It had been a long night. After saying our goodbyes and quietly waving to a sleeping John in the corner, we made our way back along the misty, dark country lanes to our hotel.

6 thoughts on “Ghostbusting in Gloucestershire”