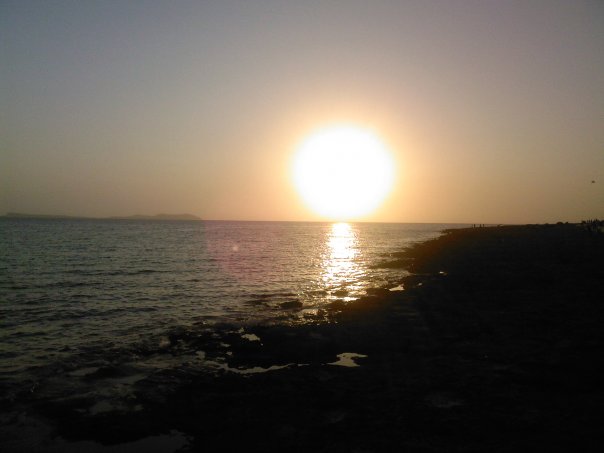 Ah, Ibiza. Also known as Eivissa, the most hedonistic  Balearic Island, The White Island, or the larger of the Pitiüses (to about 4 people). I first went to Ibiza with my family when I was 14, and I’ve been back almost every year since.

I lived there for 7 months in 2004 – it was the first place I chose to move to once I decided to move out of home for the first time. I was only 18 and absolutely terrified, but it ‘s still the best decision I’ve ever made – most of my favourite memories and the qualities I like most in myself I can attribute back to what I learnt that summer. I’ve been there with most of my close friends at one point or another, and I still have many good friends on the island – I can’t imagine a place that will mean more to me other than London.

Unfortunately, due to the club scene and several TV shows, the island has gained something of a reputation, which couldn’t be further from the truth. The holiday resorts are still quite small are spread out across the island, with plenty of unspoilt scenery inbetween. So, for anyone who is planning on seeing this amazing island for themself, here are some of my top tips.

Don’t miss…
Dalt Vila –  explore the old town both during the day and at night, it’s a completely different place depending on what time you go. There are also amazing views across the island from the top of the ancient walled city. The restaurant Placa Del Sol is in the courtyard at the top of the old town and is amazing for lunch or dinner.

Sa Penya – A bar district around the back on the port in Ibiza town – the streets are narrow and always very lively, with most of the bars being converted little houses across several floors. My favourite is Tira Palla, which is located on a small square where dancers and performers tend to congregate, so the atmosphere is always brilliant. The bar also has a great roof terrace which has stunning views of the old city walls and the surrounding streets.

Sunset – Both the spiritual and hedonistic sides of Ibiza come together at sunset, and one of the best places to go for ambience is still the sunset strip in San Antonio (whether it be the classy and expensive version at Cafe Del Mar or Cafe Mambo, or the gypsy version of bringing some 2euro sangria and sitting on the rocks) – watching the sun slowly descend followed by a rumbling applause from the crowds is always really moving.

The clubs- obv. – My favourites are Pacha and Amnesia, but this sort of thing is down to your personal preference, but it is worth noting that most bars will have discount/free tickets, so it’s worth asking around! The clubs are like nothing else you’ve ever seen, so even if you’re not a massive clubbing fan I implore you to check out at least one.

Best beaches
Ses Salinas – The far end of this bay nearer to the old salt mill is quieter, so you can enjoy the gentle waves and distant views of Formetera. The other end of the bay boasts several good cocktail bars and beach cafes, plus plenty of club promoters walk along the beach every dayto give out free/discount club tickets to those on the beach! The salt flats nearby are really pretty too – well worth a visit if you have time.

Playa Den Bossa – not necessarily the prettiest, but this is the longest beach on the island with lots of activities, bars and restaurants so you’ll never be bored!

Portinatx  – the most northerly point on the island with a small cove and some great restaurants nearby – apparently the paella here is the best on the island.

Talamanca – just the other side of Ibiza port, this very calm bay attracts more of an elite crowd due to the yacht marina being just around the corner. 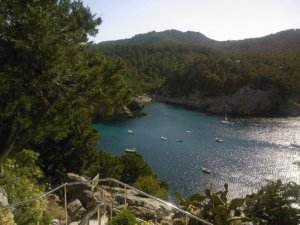 Towns to visit are:
Santa Eulalia – The 3rd biggest town on the island, this place is still quite Spanish with a nice promenade and ramblas area.

Food/drink to try:
Montaditos – small toasted bits of nice local bread with different toppings such as jamon, omelette, vegetables or cheese
Flao – a local version of cheesecake
Empanadas – small vegetable or meat pies
Ensaimada – a local pastry with icing sugar dusting.
Shandy – the spanish version with Kas Limon rather than lemonade (version with lemonade is called ‘clarra’) the most refreshing drink to have on a hot day!
Calimocho – red wine mixed with cola, it’s a weird concoction the Spanish drink before going out, the weirdos.
Hierbas/Palo/Frigola – local liquers I think taste like aniseed-flavoured arse, but they’re traditional so give them a go.
Ibizan/Catalan red wines – so good, and not expensive if you get them in the shops. There are some vineyards on the island so try to do a wine tour if you get the chance. The same goes for local honey, olive oil and salt – delicious. 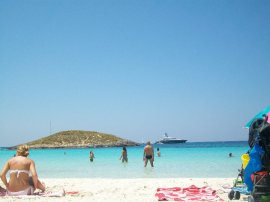 Formentera
Only 30 minutes on the ferry from Ibiza. Make sure to brings a parasol and water as this place is a sun trap. Illetas beach is the prettiest on the island, and if you walk towards the end of this peninsular the beach turns to a thin silt which is apparently very good for your skin – free spa treatment in the sunshine! The island tour is worth doing for the views – you can do this via coach or on moped/bike. There are several good restaurants now on the island but it is still being developed for tourists so many are quite overpriced – I recommend bringing a beach picnic and eating when you get back to Ibiza!