The first sunny specks of spring have started to emerge – I’ve seen two trees in full blossom already! It’s around this time of year that I start to get really excited about all of the fun festivals and outdoor events that will be gracing Bristol this summer – we’ll be seeing the return of Food Connections, Grillstock Festival, Make Sundays Special and Eat Drink Bristol Fashion – what else are you excited about?

Let’s not get too ahead of ourselves though; before we can resume supping cider on the quayside outside Arnolfini, we first have to make it through the final weeks of frosty, windy March – luckily there’s plenty to look forward to though…

For those of you in the mood for an accomplished meaty feast, look no further than ‘Stag Night‘, the latest Adventurous Eats at the Bank Tavern, taking place on Monday 2nd & Monday 9th. The menu includes venison in all its tasty guises, including tartare, loin and even liver – plus Snickers ice cream for dessert!

Meat eaters are also in for a treat if they head along to The Rummer on 4th March – it’s the return of their Steak & Lobster night, priced at £25 per head for an 8oz Rib-eye Steak, 1/2 Lobster, chips & bbq salad . This place is getting a reputation for some of the best food in town, so you know you’re in for a really special evening.

Veggies shouldn’t feel at all left out though – for the moment the lovely ladies at The Mighty Food Fight are using Sky Kong Kong as their temporary lunchtime home whilst their trusty van Rene is on the mend. Pop in for some doughnuts and some of the best vegan fare around. Fingers crossed for more of their vegan supper events – I missed out on tickets last time as they sold out so quickly!

Other food events to look forward to this month include the Spring Beer Fest at The Three Tuns from 6th-8th March, with over 30 beers, a BBQ and Meet The Brewers sessions. You can get 10 tokens for £15 – that’s 10 different beers for you to try!

Beer fans should also note Sat 21st in their diaries – it’s an all-dayer at the Moor brewery behind Temple Meads! Or if spirits are more your thing, head along to Weber & Tring’s on 11th March for their Artisan Whiskymakers tasting session, or pop to Independent Spirit in Bath for their gin masterclass on Fri 13th March.

Harts Bakery are doing another supper event on 6 & 7th March, this time Thailand is the theme. Tickets are priced at £30 and it’s BYO. Milk Thistle are also getting in on the supper club action, with a Rum Dinner (YES) on Monday 16th, hosted by rum legend Richard Seale – there will be three courses, all matched with a tasty rum.

If you want to match your food with some tasty beer instead, pop over to the new Brewhouse Bar & Kitchen (formerly The Hill on Cotham Hill) on 25th March for their Innis & Gun 4 course beer dinner. 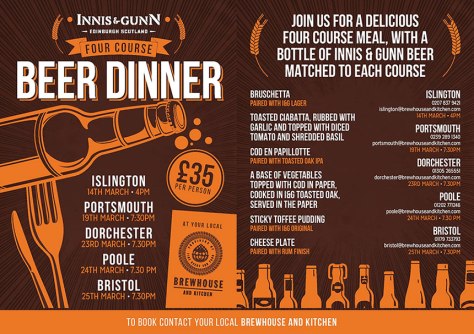 Want to kickstart spring with some cooking skills to wow your friends (or just give your Instagram feed something more impressive than a limp stir fry)? How about the ‘Plot to Pot’ class at Coexist Community Kitchen on 19th March – for £25 you’ll be taught how to make the best use of ingredients from your allotment, or even a basic greengrocer’s shop. They’re also doing courses in Ice Cream Alchemy on 2nd April! You can also book the kitchen for your own pop ups and events, so have a peruse of their website for more details.

Little Kitchen also have a fine roster of classes coming up in February – I’m most drawn to their Scotch Egg cookery class on 18th March, but they’re also running classes on patisserie, DIY pizza and vegetarian later this month, so keep an eye to their calendar!

For the more accomplished cooks among you, check out the courses on Source’s website – this month they’re doing basic butchery and fish filleting.

New places to check out include Easy Rawlins on Chelsea Road in Easton, serving up ‘modern vegan soul food’, and nearby pizza joint Zero Zero.

Bishopston residents will also be pleased to learn that Bagel Boy are opening a new branch on Gloucester Rd soon – now you won’t have to walk all the way in to town to scoff a Finger Boy bagel!

Dates for the Diary: